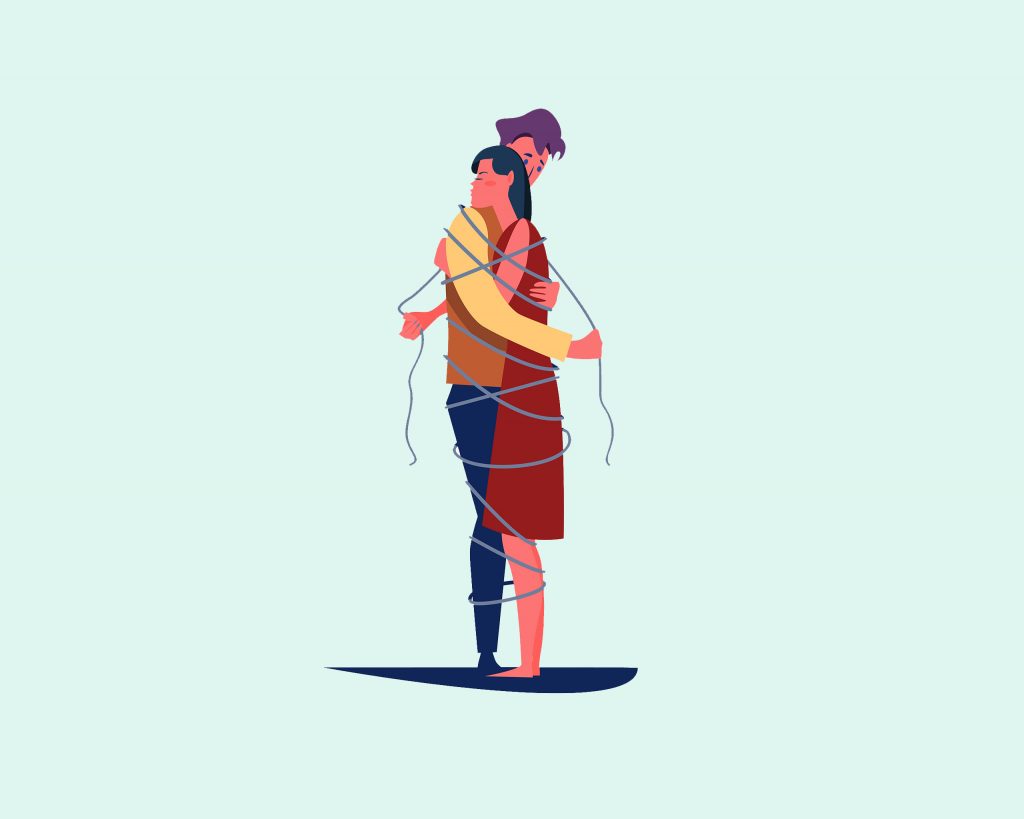 Ah, the inevitable doom of most relationships called the breakup. Why did the breakup happen? You thought everything was perfect… There you are smiling, being in love, and out of nowhere your partner goes cold. Is it something you said? You scroll through the last 50 messages and you realize that everything was fine. Worry starts going through your head: “Did I do something wrong? I have to be even nicer now.” And so, you start being ultra nice, even needier and you lower your value even more. Right now, they view you like a doormat. Your attraction is lower and lower. In their eyes, you and a random beggar from the street share the same value level right now. And then the dreaded “break up talk” happens.

“You’ve changed” (Valid)
“It’s not you, it’s me” (It’s definitely you)
“I’m focusing on my work” (This makes zero sense)
“I don’t feel it anymore” (Valid)
“I’m not in a place in my life when I want to be in a relationship.” (even though we’ve been together for a long time and everything was fine before).
“I want to focus on myself right now.” (lol)

The above could be summed up to one simple sentence:
“I’ve lost attraction and I’m not in love with you anymore.”
If you’ve cheated on your partner or done any kind of physical or emotional abuse, then that’s different. You deserve to be broken up with. But hearing any of the above will leave you confused and to be honest – it hurts.

“What do they mean it’s not me, it’s them? Why would they break up with me for such a stupid reason?”

Getting over a breakup can be hard. It’s one of the hardest things to do, even if you’re the one who is breaking up with someone. But, reasons like the ones above are confusing and they hit you right through your ego like an arrow. Humans love their ego and even though the breakup hurts, it hurts way more than it should because of a hurt ego. After “the talk” you are lost. You’re also mad and you feel like someone reached into your chest, grabbed your heart, and pulled it out. Oh, and stomped it a few times just in case. Anxiety after a breakup is on a high level.

Every breakup is different and every situation is different. Most of the time, a breakup happens because of attraction. Especially for guys – and especially if they are dating a very pretty girl. The breakup trajectory in that situation is quite easy to understand.

A lot of the time, you will get a fake reason for the breakup because your ex-partner doesn’t want to hurt you. Remember, the dumper is as confused as you are. They might seem like the worst person in the world at that moment, but you’ve got to get into their skin and think about it for a moment. Something doesn’t feel right for them and they don’t want to break up with you but they feel that they should. Hence, because they are confused, they also get mad at the dumpee and get cold. They blame you for the breakup. Going cold is also a defense mechanism because they don’t want to give you any false hope. It’s done and they have made their decision. For now at least.

Let’s get a bit deeper.


Why do people lose attraction? The simple answer is:
They fell in love with one person, they lost attraction when you weren’t that person anymore.

Sounds confusing right? I like to do that sometimes. Bare with me. I’ll give you my example when I was a young buck and when I was starting to learn about seduction.

I met an amazing girl. I knew what I should do to get attraction, and my confidence was growing more and more every day. My personality was cool; a bit cold at moments because I knew I shouldn’t give too much away and I also teased her a lot. I was not afraid to push her buttons (in a fun, flirty way). This girl was used to compliments all the time, so this threw her off. I was doing everything right from the attraction perspective. My path as a man was also starting to get developed. I recently started going to college and had big plans, I also had a lot of hobbies and tons of friends.

She was head over heels in love with me and why wouldn’t she be? I had an amazing life, I was different than those other boring guys. I was nice to her – but I was also not afraid to challenge her. It was perfect. More time passed and it was still amazing – I was slowing down a bit, but I still had a lot of those attractive traits. But after some time, I stopped doing the things that I loved and became complacent. I didn’t have any hobbies anymore. When she met me, I did all sorts of things. I also stopped going to the gym and partying wasn’t on my mind anymore. I still hung out with my friends all the time, but going out didn’t feel fun for me.

The guy who pushed her buttons was also gone. The nice guy completely resurfaced and he only had one goal in his mind: “I have to always say nice things to her.”

I sure-fire way to become boring.

By this point, this is what is happening in her head:
“I guess that’s all nice, but where is the guy that I met?”
And so, she started giving me an attitude to test me; to test me as a man. It’s called a “shit test” or if you want to put it nicer; “congruence test.” Girls don’t do that on purpose, they are wired that way. She wants a real man, so she does that to see if you still that high-value guy that she fell in love with.
Google it for now. I’ll get deeper into what those tests are and how to react in another blog.

Back then, I was still a newbie and I didn’t realize this. I became even nicer – I started doing everything I could to please her. It came to a point where I was sacrificing my own time and happiness to see her smile. I started apologizing even for the things that I didn’t do and became defensive. In my head, the scenario went like this: “If I am nice and please her in every way possible, she will also become nice towards me and we will be back where we were!” This is what every guy thinks and unfortunately, life isn’t that easy.

Girls are not as logical as we are, even though logically that made perfect sense, it doesn’t work that way. She started becoming even colder and even more disrespectful. And now, don’t get me wrong, it should be like that. It’s simple evolution. It’s a woman’s way of telling you: “Man up you putz, get a grip!”

We should be thankful to women because of that, they help us become better men that way. Has any breakup ever made you a WORSE man? Exactly, you should thank every one of your exes and cherish the lessons that they taught you.

After that, she was completely cold towards me and started hating me. I could see her eyebrows frowning every time I said something. She would also roll her eyes after every sentence that came from my mouth. And not in the cute, you-annoy-me-so-much-i-wanna-kiss-you way, but in a real serious way. Oh, and don’t get me started on kissing. We weren’t doing any of that.

“Let’s wait a bit, I want to take this step by step.” I was so dumb.
Anyway…
A simple habit break is enough. Don’t ever underestimate when a habit breaks. If, throughout the relationship, both of you had things that you did every day and they stop, be vary. Let’s say that every day at 7am, your partner would send you a message saying:

“Good morning, I love you” or any message of that type. A simple message before they go to work. They want you to know that they are awake. This goes on for months and then one day it stops and they message you at 3 pm for the first time that day. Now, thread slowly. If your partner is genuinely busy that morning and didn’t have the time, that’s okay. But if the same thing happens the next day, then something is going on. Never underestimate that. You get the gist. Whenever a habit breaks, whatever the habit is, that’s usually not a good sign.

I had a girlfriend that called me every day at 4 pm. She was never late, I knew I could expect her to call at that time, but one day she didn’t. Right around the time that I began to loosen up a bit. “She’s busy, I’ll just text her.” And it could be that she was – but then the next day the same thing happened. And again. And again. That’s when the realization hit me – she is a bit colder then she was before. And it was true. From that point on, it only got worse. We broke up not too long after that because to quote her: “You’re not the same as you were.”

There are other reasons for breaking up besides attraction of course. We covered some in the beginning. Cheating, physical and emotional abuse are also very common reasons. And frankly, they are far worse than attraction loss. You can always re-attract someone and gain more respect in their eyes by working on yourself, especially if you go no contact. It’s far worse if you’ve cheated or abused someone. One big reason can also be a loss of trust. It’s kind of related to emotional abuse or cheating. Sometimes the person doesn’t trust you anymore for whatever reason. I also found that to be hard to turn around. Trust is important and hard to regain.

It’s easier to lose attraction for a man than vice versa. Most men have absolutely no clue how to get a girl or once they do manage to get her, how to be in a relationship with one. Most of them have the attitude of: “We are together now, she will love me for the sloth that I am.”

Women are much better at social skills than us. Much, much better. Especially at the subtle things. They have to screen hard for the right partner. Once men find a hot girl, they will rarely want to break up. It’s simple: They know that they don’t have the right skills to get another girl like that. So, they are much more forgiving for mistakes than girls are. Read more about it here.

If you’re still unsure about your situation, book a call with me and let’s work it out – https://flirtivate.com/product/breakup-coaching/