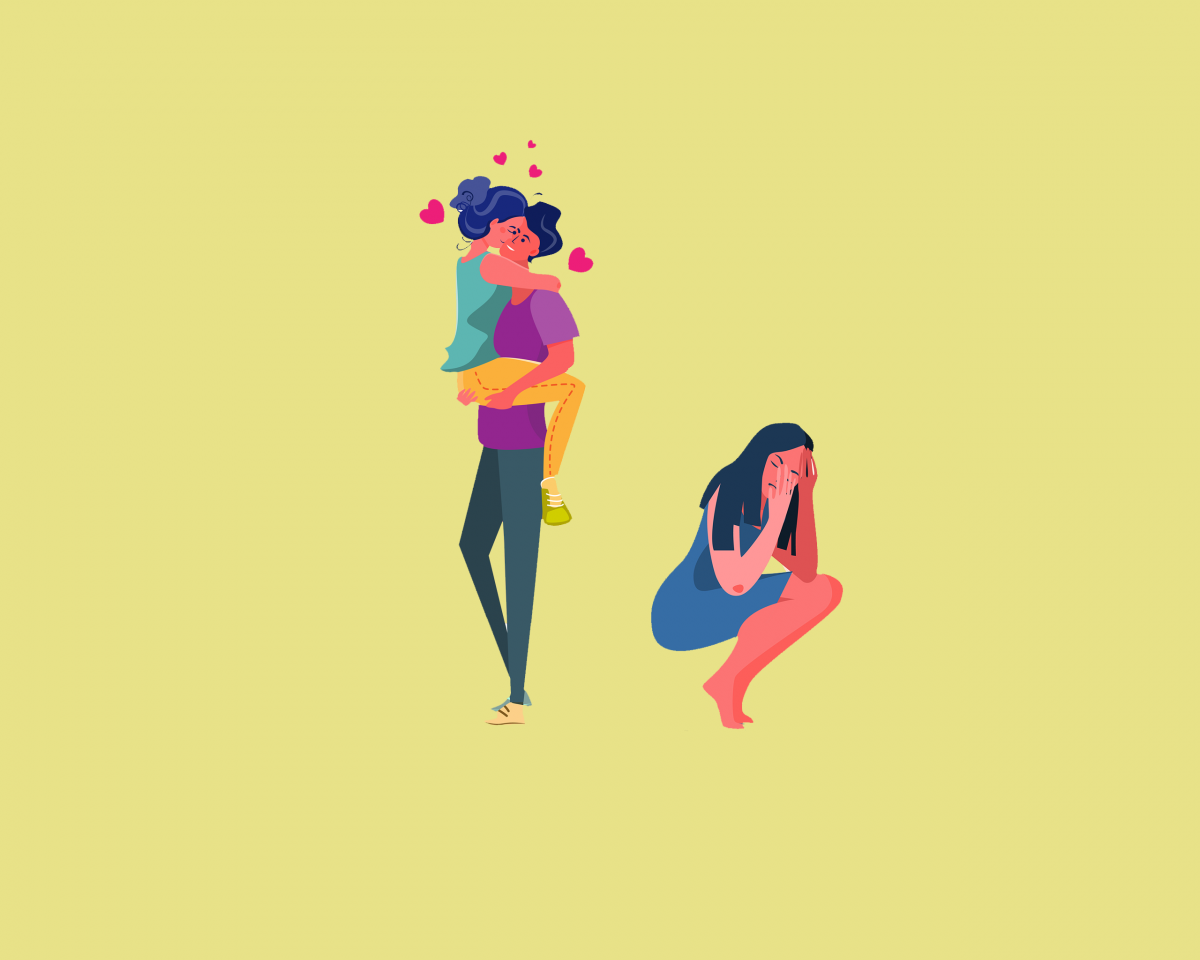 I remember the first time I saw one of my ex’s with someone else after we broke up. She could have just as well come up to me and kill me – it would hurt less. It was way back in college a little before I started with my seduction journey. We broke up three weeks before that. After only three weeks she was already with someone else? I remember becoming resentful, but what I didn’t know is that it was a rebound relationship.
This is something we all dread. It’s one of the worst feelings in the world. They broke up with you and now they are already dating someone else. They are posting pictures of their partner and they look happy. It’s like you never existed at all. Luckily, it’s all an illusion.

There’s a couple of reasons why your ex is already in a relationship this early into the breakup. Emotional attachment takes time to form, but at the same time, it takes time for it to go away. If a person was with their partner for 6 months, they had time to form that bond, and feelings were there. Their brain also got used to the other person, and it will take time to completely forget about them. Six months is not a long time by any means, but it is still a good chunk of time spent with another person.

After a breakup, the dumper is also angry, sad, and is missing the dumpee. So much in fact, that they sometimes find someone new in the first few weeks after the breakup. Why? Well, as a substitute to forget about their ex. They are using their new partner to forget the old one. They want that new relationship to work and are forcing themselves to fall in love with that new person. More often then not, they will not choose a good partner. They are not emotionally available and that is the main worry their new partner has.

After ending the relationship, there are still feelings for their ex-partner lingering. Even though they were the ones to break it off, memories are still there. Emotional attachment is also there. And it does not go away that fast – it cannot, even if their partner was the worst human being in the world. So their emotional availability is not so great right after the breakup. If you’ve ever been someone’s rebound, you’ve most likely heard them talk about their ex often. Granted, it was in a bad way, but they still talked about them.

Bad feelings and hate = connection. A true moving on is all about indifference. If they try to make their ex jealous intentionally in front of them, you can be sure they are still not over their ex. If they were indifferent, they wouldn’t care. Be extra careful if they are already putting up pictures with you on social media early on. It might be a sign of them wanting to make their ex jealous.

Most people that are in a rebound relationship find someone completely different than their ex-partner. I’ve had so many people say:
“They are dating someone they would never usually date, they hated these types of people!” So, if your ex-partner didn’t like dating shy people, right now they will date that person. They want to try something new. Now is the time when they will experiment because they are confused as well.
It’s tough to see them in the arms of another person. But consider their new relationship like using a program with a free trial. It’s there, but you know that soon that trial will expire. The good thing is: That rebound relationship could drive them straight in your arms.

You wouldn’t believe how many times I’ve heard someone say:


“My ex came back after a rebound relationship.”

As I’ve already said, they are sort of using that new person as a substitute. They are trying to ease their pain and are trying to skip that step of mourning the relationship. They will be really cold and unavailable to their new partner. The other person will definitely notice it. They will work hard to make your ex like them to the point of being really needy, especially as time goes by.

If you went no contact and disappeared as you should, your ex will also compare them to you all the time. They will compare every little detail. If you always called them at a specific time and this person never calls them, they instantly think:

“My ex used to always call me, this person doesn’t do that. I kind of miss it.”

It also applies to sex. Trust me, there will definitely be comparisons in this part, so if you were good, you got an advantage.

When they started going out with you, they took the time to see all of your qualities. After that, they decided whether they want to be with you or not. They didn’t rush things. With this person, they immediately jumped into the relationship without knowing anything about them. It often comes back to bite them in the ass because they haven’t checked for any red flags. They will enter that depression stage and the question of “did I make the right decision?” will pop into their mind. Pair that up with you having fun and posting cool stuff on your social media – Now your chances are even higher.

Another thing is; their current partner might be jealous and insecure of you. “Why? They are with them and I’m not.” Yes, but think above the stuff I said above. It’s not fun being a rebound guy or a rebound girlfriend. Imagine how it is for them. Especially if your ex is mentioning you often. If they know you recently broke up and that you were a good partner, they know deep down what’s going on. You’re always there even if you’re not. It’s a tough situation and they don’t know what to do.

A situation that happened to me when I was out in the club one night:

My ex came with her new boyfriend a month after we broke up. He, of course, knew who I was, and I could see him looking at me all the time. I was having fun and was with my friends at a table with a few girls. I sort of know him since we were in a mutual social circle sometime before that, so he knows that I like to approach girls.

My ex was a bit shaken because we recently broke up and I looked happy and was enjoying my time there. I was indifferent, and she didn’t like that. So, she gazed towards me all the time, which he noticed. As the night went on, he became more and more jealous, until it reached a tipping point and he came up to me drunk as hell. Of course, I was laughing and was having none of it; I ignored him, and the bouncer threw him out.

A few days later, I received a message from her where she apologized and said that she broke up with him. She also said that she wants to get back together. Sometimes, the rebound will shoot itself in the foot.
The most important thing to do if you see your ex with someone new is not to react. If you happen to pass by them; smile and say hi. Don’t ignore them, but look indifferent. After that, you can go to the bathroom and cry your eyes out, but when you’re near them, stay cool.

A rebound relationship usually fails right after the honeymoon phase ends. That can be anywhere from three to five months.

Every situation is unique. If you’re not sure what to do in yours, click here: https://flirtivate.com/product/breakup-coaching/