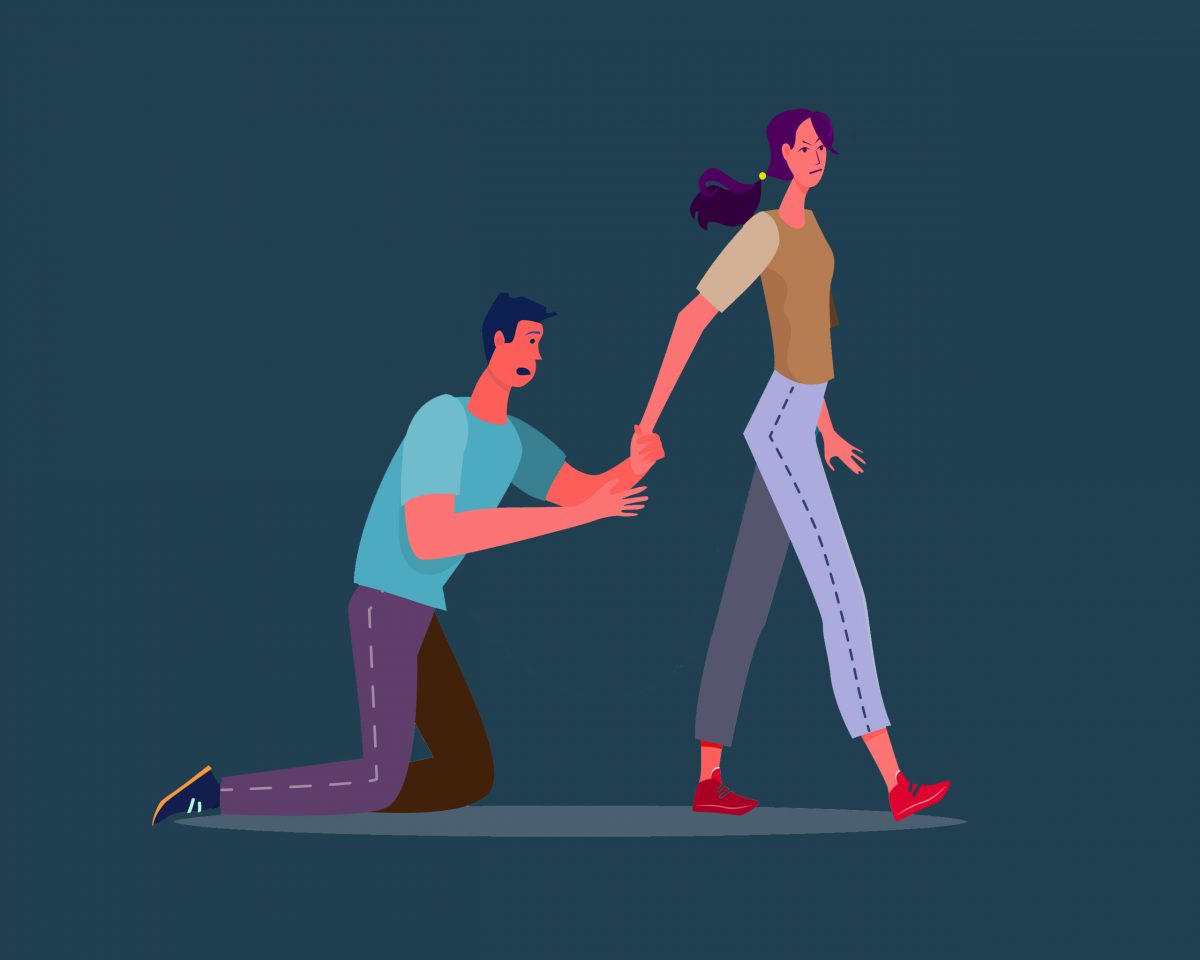 Ah yes, anxiety. That cruel, cruel bitch. One night you’re in a loving relationship and the next night you’re hurdled in a corner crying alone. And then logic goes out of the window – you want them back immediately.
Because of that, some breakup mistakes that you shouldn’t even think about doing, slip away.

The anxiety gripped its claws against you and you don’t know if the decision you’re making is right or wrong. In a state like that though, 90% of the decisions that you make towards your ex will be wrong.

That’s why no contact is the best – it allows you to regain yourself back. But even while in no contact, the anxiety will be overwhelming. You might get eager to do anything to get your ex to react and you’ll end up making a post-breakup mistake. Most of the time, without even knowing that you made it. I’ve covered a small bit of the mistakes in my no contact blog, but this will be a bit broader.

So the first one I would say is: Not going no contact.

“We can still be friends.”

Never, ever stay friends with an ex if you want them back after they dumped you. If you don’t, then, by all means, be their friend but even then you should take some time to heal. If you ever want the person back, and you most likely will after the breakup, then never settle for being friends. That will hurt way more in the long run then no contact will. You want to be with them, but they only want you as a friend. And that’s a big problem. So, you become their friend in hopes of reconciling one day and to stay close to them. Do you think this will work? Of course not. All they will do is start to disrespect you and your attraction will lower even more.

Do you want to listen to them talk about their new boyfriend/girlfriend or a cute girl/boy they recently met? Of course not, that would destroy you. That’s not what you want, so state what you want and tell them: “I respect your decision, but I don’t agree with it. Give me a call if you change your mind.

Congruence and willingness to walk away are attractive traits, show them!

This one is a big no-no. It tells the person that you still want them back and that they can have you anytime they want. It is one of the biggest breakup mistakes a person can make. The point of no contact (other than to regain yourself) is to make the person wonder about you and build a bit of anxiety in them. They need to wonder where you are and what you are doing, or, you need to be a mystery.

Breaking no contact makes you weak, boosts their ego – and it’s already big enough after the breakup. It will also make your ex angry and they might block you. They wanted freedom – so show them what’s it like to lose you. That means; no texting, stop liking anything on their social media – they don’t exist. Mute them, and continue on with your life.
Every time you break no contact, you lose the person more and more. It’s even worse if you managed to go no contact for months and then break it. That will set you back to the beginning of the breakup.

The third mistake: Not working on yourself.

The point of no contact is to become a better version of yourself and work on your mistakes. Make yourself a better person in the long run. Go out, join a gym, find new hobbies, meet new people, work harder. Don’t cry all day and stay the same person as you were when the breakup happened. It’s okay to mourn the relationship and it is healthy to do that for the first few weeks. This is a step that you will need to take. But, there needs to come a time when you decide that you are done with the sad stuff and you want to start changing. Watch relationship coaches and read books about psychology. Personally, this was my best cure. It will help you big time and you will know what breakup mistakes not to make in the future.

So many people try to do this and it doesn’t work. I cringed so many times after seeing a petty ex post an Instagram story trying to make the other side jealous. It’s so obvious and your ex will become angry and spiteful. But the only difference is, they are in a much more comfortable position to hurt you. You care way more than they do right now, so when you make them jealous it will only make it worse for you. Then they might try and make you jealous, and that will definitely emotionally hurt you and set you back. Don’t do it.

Some relationship coaches say that you should ignore your ex until they beg you to be with them again. That’s bullshit. Never ignore anyone, it will only make you look butthurt and it’s manipulative – not attractive at all. If they say hi to you, say it back. If they ask you how you have been doing, you respond back. Them messaging you is a good thing. It means that they want to talk to you, it’s a chance for you to show them how much you’ve changed. I will never understand the coaches who say that you should ignore your ex. A message from them is a step closer to you two being back together. A small step, but a step nonetheless. If you ignore them, you didn’t make that step, did you?

Sixth mistake: Talk bad about them behind their back

This is also what most people do, unfortunately, and it is also one of the biggest breakup mistakes. They keep saying bad stuff about their ex to make them feel bad and to make themselves look like a victim. If you want your ex back, you should stop doing this. Because one way or another, it will get back to them, and then you ruin your chances even more. And even if you don’t want them back, it’s still toxic to say stuff behind their back. This is a person that you’ve dated – you made a choice to date them. What you’re actually doing is shitting on yourself at the same time. Just say that you hope they are doing well and steer the conversation somewhere else. It doesn’t matter if they were the worst human being in the world or not. Be a bigger person.

A polar opposite of the one above; if someone asks you about your ex and you start venting – your ex will find out. It’s okay if you are venting to your close friends, but not to a person who you barely know. Especially if that person is a mutual friend of you and your ex. When your ex finds out, they will know that you haven’t changed at all and that they can have you back at any moment. They lose that anxiety that no contact is building. It’s weak and needy.

Eight: Going to their house and losing your temper.

Of course, this one is no brainer, I shouldn’t explain why this is wrong. You’ll end up locked up in prison. I had a friend who did this. Let’s just say that he regretted doing it.

Ninth: They message you and you vomit your feelings towards them.

God no… please don’t do this. They say: “Hey” and you barrage them with love poems and start telling them how much you missed them. In that situation, the most important thing is to be calm. I’ll get more in-depth on what to do when your ex messages you in another blog.

Tenth: Keeping tabs on them

By stalking them you will never move on. Completely mute them on all social media – don’t block them or unfollow – mute them. After that, carry on with your life and let them wonder about you. This falls into the category of the more hardcore breakup mistakes. If you’re in that realm, please contact someone to help you. You should be happy and this is bad for your mental health.

Ugh… Never give your ex a gift after breaking up. Actually, scratch that. Give them a gift. A gift of missing you. Otherwise, it’s needy, manipulative, it will not get them back and they will lose even more attraction for you.

Twelfth: Wishing them a happy birthday

Thirteenth: Blocking them on social media

If you’re suffering so hard that you can’t take it, then for the sake of your mental health, delete them. My advice though; is to leave them added but to mute them. Removing them or blocking them will show them that you are butthurt and sad, and we don’t want that.